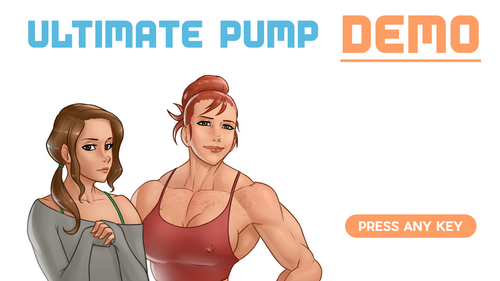 It was a long road to get here, and I will get into that more in other posts, but I am pleased to say the first stable release of the Conversation Demo is now live for you all to try.  In it, you will play as Aria, our Persona-style silent protagonist, and have an encounter with one of the six potential partner NPCs in the game, Amanda “Mandy” Shaughnessy. After a conversation, the encounter turns into something of a date with the bodybuilder transplanted to Central California from New England.

The day plays out over three scenes, at the cafe where you meet, at the gym for which the game is named, and finally at Mandy's apartment. While a the relationship elements were a bit hastened comparative to the full game, we designed the scenario to give you an idea of what Unique and Milestone Events will feel like.

Unique and Milestone Events? What are those?

Glad you asked! While you will interact with the main cast quite a bit, Unique Events (UEs) and Milestone Events (MEs) are far more than just everyday conversations with them. These events will be opportunities to get learn more about each of the women who are interested in a relationship with you and to advance those relationships in a big way. Unique Events will drop hints and clues about your potential partner's backstory and those elements along with events happening as the game progresses, will build towards turning points in each narrative which play out as Milestone Events.

I would not want to spoil anything, so I am not going to say much more than that for now, but I will say I feel a great amount of empathy for each of these ladies know the challenges each of them faces. I joined the project, in part, to ensure that the stories of Mandy, Aiko, Sofia, Lucina, Jenn, and Wren live up to that promise and each of them feel like more than "sexy vending machines." As such, identity ended up a core theme of the game since each woman's narrative is about them defining who they are despite their pasts and/or antagonistic external forces.

Well, aside from cleaning up a few errors in the scenario's dialogue, there are some features to the game engine itself we still need to finalize which are top of the list.

Foremost, we need to find a bug-free method for doing scene transitions. This was, by far, the most frustrating issue that we faced and one of a few big reasons for the delay. There are fading wipes that need to be implemented to move from scene to scene and then there is the bug with the loading screen not showing over the stage. Both are things we cannot wait to get resolved.

After that, the dialogue engine itself needs to get tightened up a bit. Another major part of the delay was trying to program spite movement as something that could be called from the dialogue engine, but the implementations we tried were... not great. After focusing on getting conversations themselves working, we are fairly close to getting those elements stable and once we do, we already have quick scenes laid out for each scene which should greatly improve the feel of the game's acting.

Beyond those things, we have a few maps left to complete, a lot of art assets to fabricate, scenes to craft, and more to bring you a complete RPG+Dating Sim experience. Tentatively, we are targeting (Late) Summer of 2018 for an Exploration Demo which will see you playing as Aria to help one of your potential partners search for something they lost. It will feature multiple members of the main cast, will allow you to explore all of Crestpeak Bay freely, and will be a much more robust look at what we are aiming to do here with Ultimate Pump.

In the mean time, I am aiming to have weekly devlog posts to keep you all up to date on where we are with development. In addition, I will have other posts with things like art reveals, interviews with the team and with the game's characters, as well as contests for in and out of game swag. I am finalizing an interview with Moxy for late this week or early next week and I also want to more fully address what all imploded mid-November (spoiler: it was a lot of things).

Until Next Time, I am Misty F and on behalf of the UP team, thanks for the support!

Have questions about the game? You can reach me via e-mail, twitter, or on the game's Discord server. You can also ask things of Moxy or myself on tumblr.

Want to support our efforts to be the definitive muscle-growth RPG and lesbian dating sim? Pledge your support on Patreon to play more frequent builds, see more art sneak peaks, or even write some dialogue to play on a radio or TV in the game!